Hi there! Welcome to my food column and first recipe proper! Last time I talked about how my inexperience in the kitchen might steer these culinary creations into somewhat unappetizing territory (hence the name of this column!)

But if you bear with me, I promise we’ll have fun and learn some things in the process.

Today I had hoped to start simple. Eggs, sunny side up with a side of ham and a bit of a Kitty Fondue twist. To make my special breakfast, you’ll need the following items:

I don’t know how much of the above list is common sense, but I decided to include it all anyway. Feel free to experiment and add or remove items as you see fit.

You might want to pair this meal with a nice cocktail, for instance.

This is important! If you’re like me and your frying pan has been sitting unused on the counter for several years since your friend Brenda bought it for you as an engagement present and you couldn’t bring yourself to use it because it reminded you of how painfully everything dissolved between you and David but you also couldn’t throw it away because that would be like letting go of the last little piece of him and you’re not quite ready to do that yet, then the pan will probably be covered in a thick layer of dust.

Or, if you’re the type that cooks food ever, you might have leftover residue from last night’s stir fry baked into the pan. Time to scrape that off!

Be sure to use lots of soap and water and a good washcloth or scrubby. Don’t do what I did, however, and make the mistake of forgetting to rinse out the pan all the way! I got absent minded thinking about the past and left a bunch of soap bubbles sitting in it when I put it on the stove! 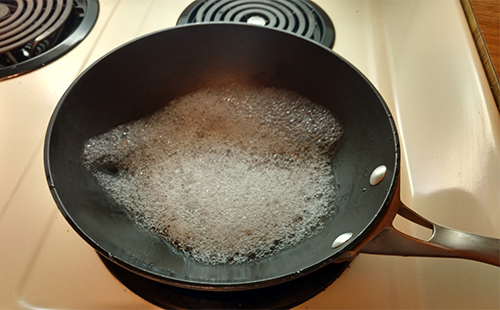 What a mistake! I mean, how could he leave me like that?

By the time I realized I had left the soap in there, it had already baked into the pan. I just kept going with my meal preparation. The soap should bake away no problem, right?

After you’ve turned on the burner and got your pan heating up (soaped or otherwise) now is a good time to slice your ham. Cut as many pieces as you like. At the end we’ll lay them out on the toast, so you want enough to cover the surface area of your bread. I did about 7 little slices and that seemed to be enough.

Be careful when slicing the ham! I know sometimes it’s tempting to get a little carried away when you’ve got a weapon in your hand. You start to remember all the people who did you wrong. Like when you called the caterers to cancel the reception dinner and they laughed at you and said stuff like “Saw that coming!”

Feel free to vent your frustrations on this immobile chunk of ham, but watch out for that knife blade! Personally, I cut myself in several places during this part of the meal preparations. Just being careless with my swinging and hacking.

If you bleed all over your ham, DO NOT PANIC. Fortunately, cooking at high heat sterilizes most germs and blood-borne pathogens, so there’s no need to throw away your soiled meat. Just make sure to cook it thoroughly!

Oh, and take care to bandage your sliced hand properly so that you can focus on the rest of the food. Just be glad that this wound is physical. At least it is the type that will heal.

At this point the frying pan should be hot enough to start cooking. Now, this is where I like to spruce it up a little. I throw in a bit of spinach to line the bottom of the pan!

I used to eat way more meat and carbs than I did vegetables. After a while it really started to have a negative effect on my body. That’s why I recommend that you make a conscious effort to add veggies to your every meal! If you do then maybe you won’t have to worry about your fiance leaving you a month before your wedding because he doesn’t like kissing “scurvy mouth.”

Next crack the eggs over the top of the spinach. Be careful when you do this, and be sure you don’t-

Gosh darn it. All right, fish as many of the shells out as you can. Try to not burn yourself on the hot pan too much. Crap. This isn’t going well at all. Maybe, uh, crack some pepper on it all and then cover it to hide your shame for a minute.

Go ahead and start toasting your bread now. If you do it right, it should pop out exactly when your eggs have reached perfection.

After letting the eggs sit for a bit, uncover and then add your ham slices. I guess you could use a separate pan if you want, but I just threw mine on the side like this:

I may have timed this wrong, because the egg yolks were already starting to harden when I put the ham in there. Oh well. Just keep an eye on them and it shouldn’t get too well done.

Oh, maybe I should have mentioned that you should only set your burner heat to medium. I have a tendency to cook everything on max heat and it usually backfires. I remember one time David surprised me by coming home from work early and out of reflex I spun around and smacked him in the face with the frying pan I’d been trying to sautee cauliflower in. As if that wasn’t bad enough, the pan had grown red-hot from its hours sitting on the stove so he came out of the hospital with a terrible Calphalon-shaped burn across the entire right side of his face. Ugh, how embarrassing!

Moments like those are what led to the restraining order, I think.

Step 4: I added beans for some reason

I’m not sure why I did this. I think because I wanted it to look fancy, I guess. Add a colorful ingredient that you wouldn’t expect to be in a breakfast egg dish so that it would stand out on Instagram or something. Because there’s nothing more exotic than beans from a can. 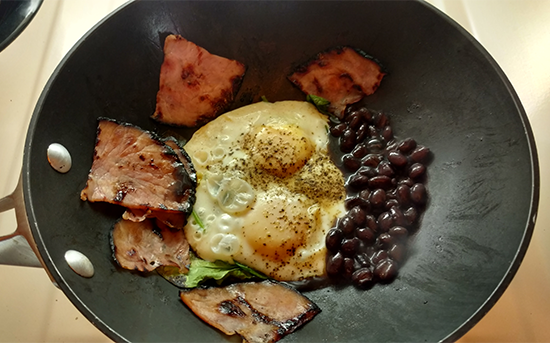 If you’re following along, by now everything should be in total disarray. Even if I was going to fully commit to the idea of bean eggs, I added them way too late. The eggs had already hardened and the ham was starting to burn. The beans kind of sat off to the side, sizzling and solidifying into one big mash. The spinach had been reduced to a gray, goopy mush. Not to mention that-

Well, it was good and burnt now. Sometimes the timing for something just never quite works out, as I’ve been told over and over these past few months.

I’m just lucky this breadpocalypse didn’t start my kitchen on fire like that time I used the toaster to heat up some potato salad.

Well, at least the overcooked eggs and ham should pair quite appropriately with the charred toast. There’s not much we can do now except for scrape that hodgepodge of blackened protein out of the pan and onto the bread. Yes, some of the Teflon is going to come up off the pan and stick to your food. That’s just how things are going to be at this point.

I’d love to blame this on my past relationships. To make it David’s fault somehow. But I can’t, not really. I was a worse cook then than I am now, thanks to all of those culinary therapy classes I took. There’s really no excuse for this kind of outcome, other than my own perpetual incompetence. But that’s life isn’t it? A series of mistakes followed by lessons learned. Yes, sometimes your food doesn’t come out the way you want it. Sometimes the man of your dreams leaves you to go live in some asylum in Europe. We adapt, we grow, and we try to move on.

Step 6: Serve and try to forget

Well, there we have it folks. Chalky, bean-covered eggs (with shells!) seared into wilted, acidic spinach and slapped onto some bloodstained ham-jerky. All this on top of toast that felt like eating steel wool. Oh, and the whole thing tasted like soap. Turns out that stuff lingers.

The good news, at least, is that this column is already living up to its namesake.