All right, I thought. It’s just a peanut butter sandwich. How hard could this be?

I learned a lot of lessons from my last article. After that disastrous experience, it was time to simplify! I juggled too many ingredients last time, that’s what did me in. I got excited about cooking and exceeded my skill level.

That couldn’t happen this time! When I set about cooking I had a guest in my house, so I knew I’d have to make something halfway decent.

My nephew Calen is staying over at my house while my sister and her husband are out of town on vague “business” (it’s a sex cruise, if you ask me). For a while I got away with feeding the kid raw vegetables and saltines, but three days in I figured it might be time to cook something.

So, to keep with the theme of simplicity, and find something a six-year-old boy will enjoy, I decided to make a peanut butter sandwich. Easy, right? Well, do keep in mind this is me we’re talking about here.

Let’s get started. Here’s what I used: 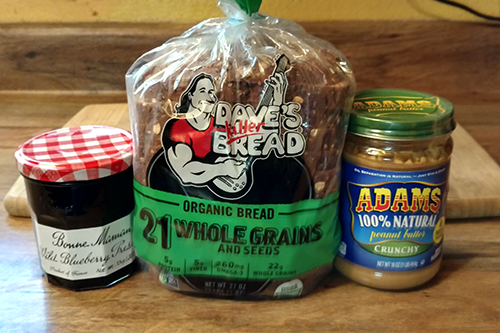 Though it’s pretty hard to screw up a PB&J, I do have one major suggestion when it comes to the peanut butter itself. I highly recommend you avoid Skippy or Jif or one of those other awful brands. If you don’t understand why, just go take a look at their ingredient labels. Hydrogenated oils, sugar, preservatives, and six to ten other things you’d have to be a chemist to be able to pronounce. Ugh. Go with the natural stuff, trust me. Just two ingredients in there: peanuts and sometimes salt. What more do you need?

I’m less picky about my jelly and bread, so go ahead and try the brands here in the pictures, or do your own thing. I’m not a control freak!

All right, on to the preparation! I brought Calen into the kitchen to hang out while I spread the jelly and peanut butter. It’s important to engage kids at this age. Plus, I didn’t want him disappearing and breaking any of my stuff. I don’t have children of my own, so I tend to forget to move my various glassware and knife collections to higher shelves whenever the young’uns come over.

Anyway, I got the PB and the J spread across the bread in one try, which is a first for me.

I started to put the sandwich on a plate and hand it to Calen. Then I had a better idea.

If I’m going to be producing a food column, I couldn’t just make a boring ‘ol sandwich, now could I? In order to be a successful culinary blogger, my sandwich would have to be able to stack up with the greats. Plus, I wanted to make something fun and exciting for my wide-eyed nephew.

Calen wouldn’t be a normal kid if he didn’t want his crusts cut off his sandwich. So I decided to do just that, but with some pizzazz. I have these adorable little dinosaur cookie cutters that I hardly ever get the chance to use because I don’t make cookies. So I re-purposed them for the task at hand: to cut out cute shapes in this sandwich!

Feel free to use whatever creature-shaped cookie cutters you want!

I went with the T-Rex and the triceratops, because they’re what a quick Google search told me that little boys think are the coolest dinosaurs. After a bit of tweaking I got the cookie cutters to fit just right on the bread. Calen bounced on the balls of his feet as he watched, no doubt excited for his dino-themed snack.

“Want!” he said, over and over, grabbing fistfuls of air with his outstretched hands.

I tousled his hair and told him he’d have to wait just a minute longer while I made his sandwich into dinosaurs. Unfortunately, when I tried to cut out the shapes it didn’t go so well. 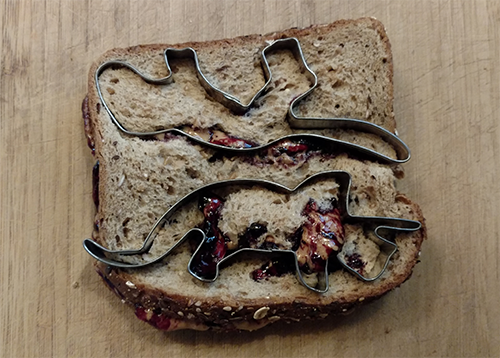 The T-Rex came out all right, if a little scrawny and goofy-looking. He kind of looked like a cartoon character to me.

The triceratops, on the other hand, didn’t fare so well.

Ugh. These had not turned out nearly as cute as I was hoping. Not to mention the disturbing graveyard of surplus entrails and extraneous limbs that got left behind. 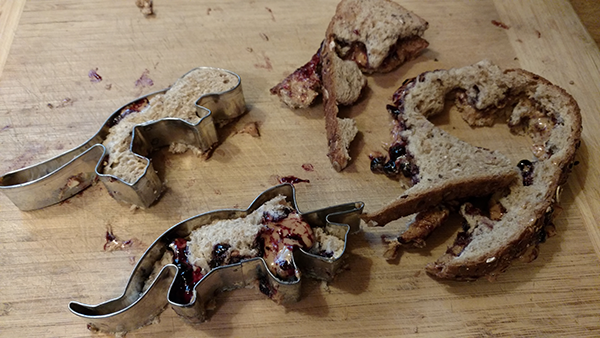 Well, maybe there was still a way I could salvage this. I just had to distract Calen from the gory appearances of the freshly cut-out dinosaurs. I figured the best way to do this would be to deep fry them.

Remember that organic peanut butter I ranted about earlier? Well, here’s where it becomes important to this recipe. In natural peanut butter, the oil will separate and float to the top. Most people just stir it in, but not this gal! I drain the oil off the top and save it in a jar for later use. 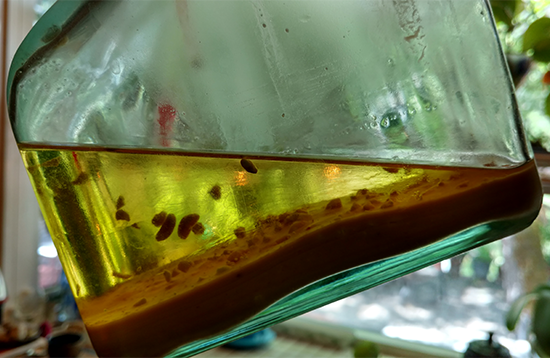 After enough jars of peanut butter you’ll have yourself plenty of peanut oil to use for further cooking. It’s economical, practical, and as healthy as oil could be!

I didn’t have quite enough excess oil saved up to fill an actual deep fryer, so I just poured what I had into a frying pan. If you’re following along, be sure to turn the heat all the way up and get it sizzling!

Soon the burner was nice and red-hot and the oil was popping and foaming. I took a deep breath and tossed the dino-sandwiches into the pan. The oil hissed and sprayed out in various directions.

I shooed Calen back behind a safe perimeter and attacked the bubbling volcano with my spatula. I managed to flip both the dinosaurs over to cook the other side and pulled back to lick my wounds and wipe oil out of my hair.

Soon the smoke alarm down the hall went off, that shrill, loud chirping like a gigantic furious bird. I ran down, grabbed a chair, and after some angry cursing and flailing managed to get the damn thing to shut up.

“Push to hush. Smash with a hammer to silence.”

When I returned Calen had his hands clamped firmly over his ears. He pulled them away and pointed at the stove. I rushed over. Oh no! The dinos had burned!

I spatula-d them out as fast as I could, but the damage was done. I laid a paper towel on a plate to soak up the excess grease and put the dinosaurs on it. I said nothing. Calen sniffed.

They had cooked way down, to the point where I didn’t think they’d be enough food for a growing boy. So, as Calen stood staring open mouthed at the cooling dinosaurs, I dumped the excess sandwich crusts into the oil.

I tried to take these out as soon as possible so they wouldn’t burn, but the strips of sandwich were super long and unwieldy to move around. So they, uh, stayed in there and cooked for a while.

Finally, I fished all the bits of sandwich out of the oil and threw them on the plate with the dinosaurs. It looked awful. Like, picture the mass extinction of millions and millions of dinosaurs all those years ago. This was ten times worse than that. 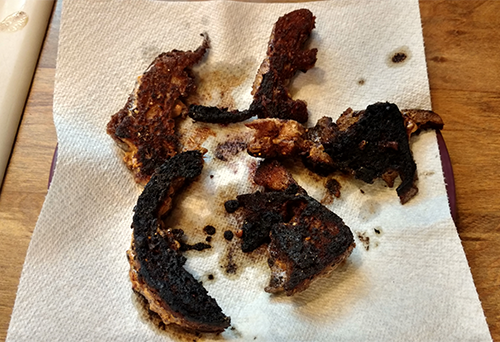 At this point there was nothing more I could do. I looked at Calen. His bottom lip shook like a fault line. I tried to arrange the pieces to be at least a little presentable but it was a lost cause. Out of morbid curiosity, I snitched a chunk of sandwich before I served it to him. I spit a wad of black goop into the sink. It tasted like deep fried, soggy charcoal.

Calen took one tiny bite and that was all he could handle. I wish I could have gotten a picture of him eating it, but by this point he was crying so much that the water damage ruined my camera.

Blahhhh. Well, there we go again. I managed to screw up yet another perfectly simple dish. I’m going to have to go back to the drawing board if I want to make any sort of progress with this column.

Calen has been sobbing nonstop since “the incident”, only pausing to drink the Gatorade I force on him so he’ll replenish his electrolytes. The irritable part of me thinks he’s being a bit dramatic, but all in all, I understand. I managed to ruin his favorite food and his love for dinosaurs in one fell swoop. I’d hate me too. Hopefully I can get him to calm down before his parents get back to pick him up.

Sigh. It’s going to be a long three weeks.

Read the rest of this column here.